Throbb is a collection of eleven stories exploring themes related to gender fluidity, expression, and identity. Throbb has content ranging from kinky and dark to wholesome and sweet; sometimes both extremes can be found in the same story.

The compilation has 35,630 words in total. Synopses below, with content warnings in the images.

Isaac’s Princess: Chris’s non-binary roommate discovers that he wishes he was a trans girl.

Symbiotic: Twinky’s genius roommate passes away, and in his will bestows upon him a sentient piece of clothing. Will this suit reveal Twinky’s latent desires? [this story can be viewed for free here]

Kitty: A husband and wife want to replace their dead dog. They adopt a goth catboy that everyone perceives to be a normal cat. The illusion slowly fades away.

Star Fighter: An anti-fascist war hero is supposed to marry the princess in an arranged marriage. Things don’t go according to plan.

Black Lipstick: An androgynous and vain goth gets hypnotized, and his secret desires come out into the open. Will he be able to keep things under control, or will he fall prey to his fetishes? [this story can be viewed for free here]

F*ggy Bimboy Comedy Hour: A goth boy who is trying to heal after leaving an emotionally abusive relationship drinks a potion that makes him stupid, in an effort to avoid feeling pain.

SciF: A Martian ambassador's secret desires come to the fore during a meeting.

Sadist in the Machine: Someone wants to fuck a mean robot. A mean robot wants a goth girlfriend.

Alien Sensation: An alien Mistress abducts a human, and decides to turn him into her special pet.

Alien Sensation II: After Sair’ta freezes Lem to prevent him from aging further, she realizes she needs a new pet.

In order to download this book you must purchase it at or above the minimum price of $3 USD. You will get access to the following files: 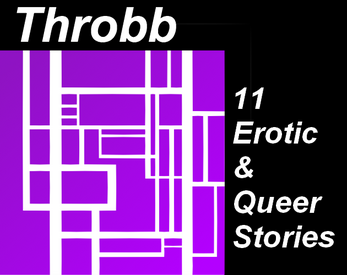 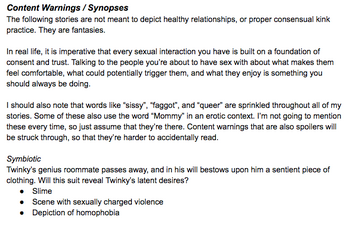 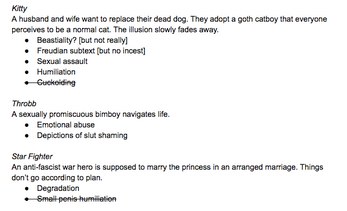 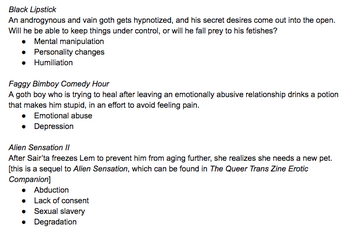